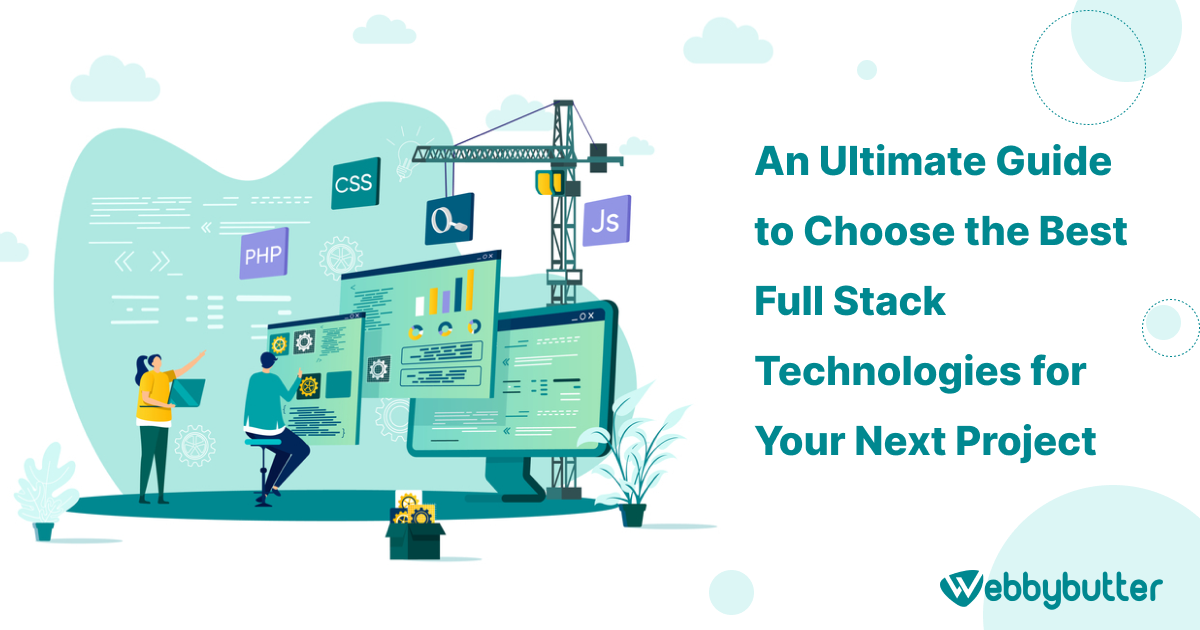 Nowadays, Full Stack Development is a very important factor for startups and businesses. This is mainly because of the increasing demand for web apps for competing online and boosting the brand image. So, what is full-stack development?

Full Stack Development is the development of both the front end and back end in a web application. Further, it refers to design elements that are feasible for everyone and readily accessible for the end-users. It affects the development of user interfaces. The top Front End technologies used for web development are HTML, Angular, React, CSS,  Vue, and JavaScript.

Hence, a full-stack developer is basically one who has sufficient experience in both front-end and back-end technologies. In simple words, they have knowledge of both the app development process from its business logic down to its presentation layer.

This article is an attempt to provide you the information about the combination used in Full Stack Development.

Best Full Stack Combinations to watch out for

MEAN acronym stands for 4 frameworks. These frameworks are MongoDB, ExpressJS, Angular, and Node.

✤ MongoDB – is a prominent database server that stores data structures in binary JSON format. It is also known as a NoSQL database program that supports handling large-scale data sets with ease.

✤ExpressJS – is an open-source Node.js framework that is useful for back-end web application development. The flexibility of this framework makes back-end development easy for the developers.

✤ NodeJS – is an open-source back-end framework that supports cross-platform runtime in a JavaScript environment. It is known to be a great platform for running high-performing and scalable server-side applications.

Reasons why MEAN Stack is so popular:

Reasons why MERN Stack is popular

Must Read: MEAN vs MERN Stack Development: Which One is Best for App Development?

LAMP is well-known for its free and open-source system for back-end development. It incorporates Linux OS, Apache web server, MySQL database, and PHP. Besides PHP, developers can also use technologies like Python and Perl as an alternative.

Linux Operating System is the backbone, as all other components run on top of it. The programming language and database management utilized in developing an app must co-occur with what platform to operate. Here, PHP and MySQL function properly with Linux.

Developers can work with the other stack components on many operating systems, but still Linux dominates because of its flexibility and easy configuration options in comparison to other operating systems.

Apache web server is one of the most used servers globally. It operates more than half of the websites on the Internet. With its well-developed community, Apache delivers extensive support. It operates using HTTP to execute requests and transmit data over the Internet. Even with the availability of the tools like NGINX developers prefer   Apache because of its feature-rich ecosystem.

MySQL database is an open-source relational database and the third layer of the LAMP Stack. It stores the app data in a structured way and is easily used for queries using SQL language. MySQL database is known to handle large and complex data and manage heavy websites. Relational Database and SQL support allow developers to build a dynamic database on an enterprise level.

PHP has the role of combining all the elements of the LAMP stack. It enables web apps to run seamlessly. The language runs with the Apache server and enables developers to create a dynamic page using the integrated PHP code.

Now let’s have a look at some interesting combinations of different technologies.

Angular alone is very useful and effective but combining it with NodeJS takes the development process to a new level. Let’s have a brief look at why Angular + Node integration is one of the most preferred full-stack app development combinations out there.

With NodeJS and Angular, full-stack developers can easily-

5] React and Ruby on Rails

React and Ruby on Rails is quite popular while developing interactive apps. This is mainly because this technology combo boosts the response time of an application in real time.

Here are a few perks of linking React with Ruby on Rails:

The learning curve for Laravel and Vue is easy, and both technologies coming together deliver an excellent User Experience. Laravel is a PHP framework that provides a wide range of tools that help developers in building Enterprise level apps with easy usability, proper scalability, and flexibility.

Vue.js is a progressive, incrementally-adoptable JS framework that helps in designing a view layer in Single Page Applications. Vue comes with a variety of tools and lots of libraries which makes it a preferred choice for the developer.

MEVN consists of technologies like Mongo, Express, Vue, and Node. It is used to make scalable, production-ready web apps. MEVN stack combination uses Javascript, and it’s easier for developers to work on projects. Popular sites Alibaba, Behance, and GitLab use the MEVN  Stack.

In recent times Python is gaining immense popularity globally. Python and Django make a good pair for creating web apps. Django provides the structure, and Python delivers the flexibility. This combination lets developers quickly build prototypes & MVPs. Using Vue in the combination makes it more simple to deal with the front end. Hence, the combination of these three technologies can help developers provide an efficient application with ease.

✤ Who is a Full Stack Developer?

Full Stack developer is someone who has a wide range of skills and can operate on both the Front End and Back End.

✤ What technologies should a Full Stack Developer know?