Wireframe vs Mockup vs Prototype – A Detailed Differentiation 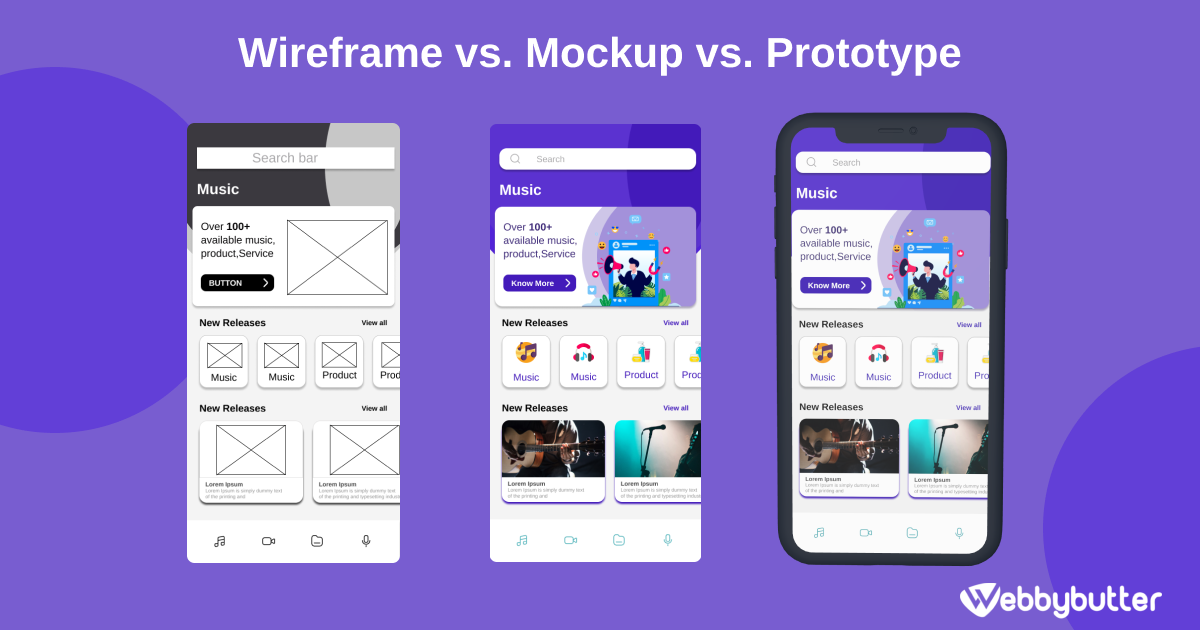 Creating a design for any application is a tedious task. It demands a high level of imagination and innovation in form of Wireframe, Mockup and prototype. Further, preparing an excellent design, it requires: proper planning, visualization, and thought process, once you handle this, it helps in assembling the idea for transforming it into a working version.

The design phase involves the best industry standards such as Wireframe, Mockup, and prototype, so it’s important to know how are they similar or what sets them apart. Many people think of Wireframe, Mockup, and Prototype as the same but, it’s a common misconception. To avoid the conflict of similarity, continue reading this article to understand the difference between Wireframe vs Mockup vs Prototype.

So, to know how these factors impact the UI/UX of the application let’s understand them in brief.

What is a Wireframe?

A wireframe is simply a digital sketch of the design you plan for your actual layout. This sketch of the design is based on the functional requirement. Once you are done with the Wireframe, you can transform the layout into buttons, tabs, menus, and graphics for the basic layout of your application or website.

A website wireframe is a visual representation of the webpage; it specifically focuses on content, layout, and behavior. These page layouts are a blueprint for creating a design in the development cycle.

Basically, wireframes are a part of the software requirement specification (SRS) document. So, they also help both developers and testers understand the requirement.

Another key point to understand is that in Wireframe, there is no specific need to have fonts, colors, schemes, or styles. All you need to require to emphasize is adding blocks with names i.e. specification of a logo, location, or banner.

✦ High-fidelity Wireframes show a complete representation of the end-product, here many of them are interactive i.e. they respond to user actions.

✦ Low fidelity Wireframes include basic content such as visuals that are static in nature.

Wireframing is an important step in mobile app development process. It is responsible for the overall design and also for displaying app functionalities and highlights. The mobile app wireframes template bridges the gap between the initial idea and the end-product.

What is a Mockup?

In mockups labels of components such as fields, notes, font types, navigation, and menu are included in the design. The mockup is a static page layout, but also gives a fair assessment of how the final product might look. It will appear as a replica of what the mobile app or web page will look like.

The idea behind creating a mockup design is to obtain the final design before launching the end product. Hence, it’s a crucial step for an application designer, because not only it will help the internal development team and testing team, but also help the client get a sense of the final product with visual details.

What is a Prototype?

A prototype is an interactive model which includes basic functionalities. In the mockup, the user can visualize the design, but a prototype will not only show what the final product will look like but also how it will run.

In short, the Prototype is for simulating the UX. This simulation further helps in understanding how the functionalities will function in the application.

Here, users are able to click on the buttons, enter field information, and test the operational flows as per requirements. Once the user gets a hands-on experience of the prototype, they can provide feedback. So if there are any loopholes in the design flow, the developer’s team makes sure they are taken care of before the final launch of the product.

An interesting thing in prototyping is that designers are able to use single wireframe or mockup while making a prototype.

Also Check out: Difference Between Sketch, Figma and Adobe XD

For developing a high-fidelity prototype, a designer connects all the buttons and links them in order to complete the prototype.

UI/UX designers require high-fidelity prototypes in order to get close to the end product. The faster the high fidelity prototype is developed, the more time for fixing the issues from the designer’s perspective.

Paper prototyping can sometimes get quite adventurous, with team members able to simulate the taps, scrolls, and swipes i.e. visualizing the navigation of the app from a user perspective.

Wireframe vs Mockup vs Prototype- The difference So, traits of Wireframe, Mockups, and prototypes set them apart when we compare. The tools involved may be similar but, they all focus on diff[/fusion_modal_text_link]erent aspects of the elements. The time factor is not an issue, because ultimately they all combine to provide the design end-product.

When to use Wireframe vs Mockup vs Prototype?

It is important to know, that there are no rules defining the usage of any of these three elements specifically. It all comes down to the type of project and team. We will simply outline some key points to when to use them.

When to use Wireframes

You can use wireframes in the following scenarios:

When to use mockups

You can use mockups in the following scenarios:

When to use prototype

You can use prototypes in the following scenarios:

Till now we have discussed wireframes, mockups, and prototypes, their differences, and when to use them. So, using this data let’s understand how these 3 elements put on a show together in the design phase.

Also Read: Why to use ReactJS for your next project?

Wireframes, Mockups, and Prototypes- The connection in designing phase

These 3 elements may have their differences, but they all fall in the same phase when it comes to project development. The combination of these elements gives you a foundation to build your project.

So, whenever the designing team gets together they turn the project idea or requirements into Wireframe. This wireframe provides device-specific design irrespective of the platform with an intuitive UI.

After the transformation of the idea into wireframes, the application acquires a basic structure which is translated into a mockup. At this point, a designer is able to finalize the design and transform structural elements into buttons, graphics, and content layout.

Prototype involves interaction, so when the mockups are ready the prototypes step in to provide the interactive features. This helps the designing team to understand the application flow from a user perspective.

Who is the winner?

The starting phase of the article shows the difference in Wireframes, mockups, and prototypes but, by the end, we also realize that these three share a bond in the designing phase. So, if you skip wireframes you won’t have mockups and without mockups, the prototype will not be accurate. Hence, there is a dependency among the elements in

Step on the gas paddle! Reach out to us for the next project. Yes, you read that right. By the time you are done reading this article, your competitor may have already completed the design of their next application. So, take the next step in designing with Webbybutter to get your app an amazing outlook and stand out from the rest of the group.

You may have not decided who is the winner in Wireframe vs Mockup vs Prototype, but if you go with Webbybutter for your next project you will be the winner.