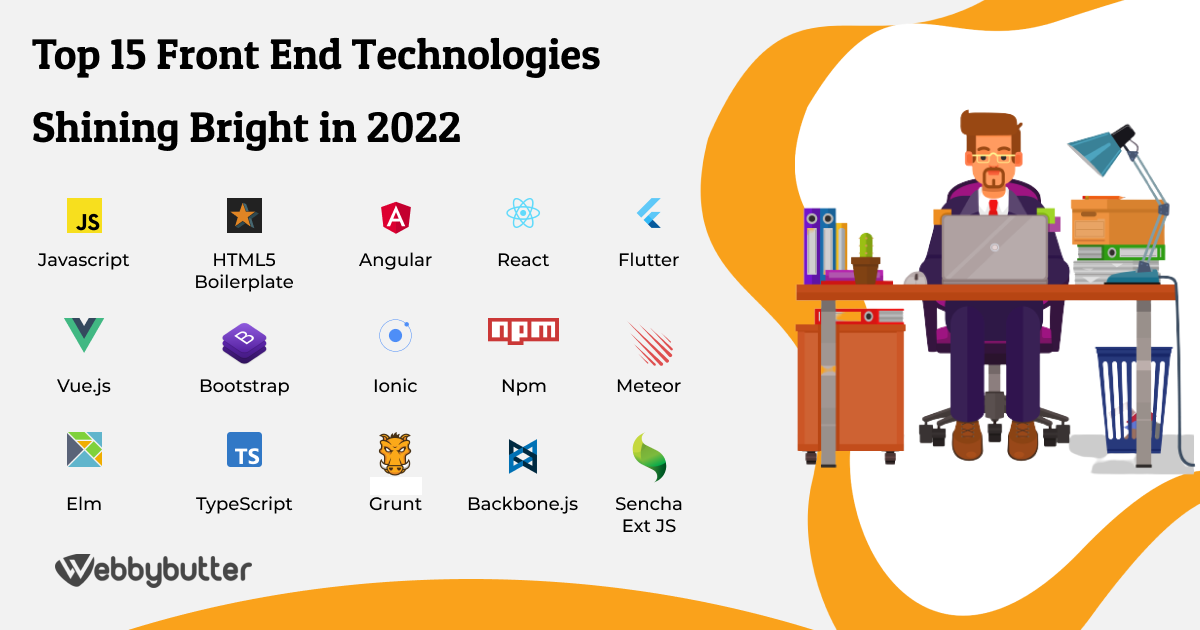 Front-End technologies write the script of success for almost any software infrastructure. Due to the COVID pandemic, the Work from Home culture has got rapid growth, the importance of digitization and online operation is significantly rising.

U.S bureau of labor statistics suggests that the growth of employment is going to be around 13% in this decade (2020-2030), for web developers and web designers.

What is Front End Development?

The Mobile-first approach and responsive web design (RWD) are ideal methods to embed design components to the Front-end in different sizes. Further, this approach becomes important if you decide to build a web application or a website, to be accessible on both mobile & browser.

Now that you have the knowledge of Front end development, let’s explore different front-end technologies.

Frankly speaking, there are 100+ Front-end technologies to choose from for your next software project. But, only a few of them stand out in handling the workload of Front-end development.

So here is a list of the top 15 front end programming languages set to rule in 2022:

JavaScript is one of the most popular programming languages of the World Wide Web, along with HTML and CSS. Further, it is also known for transforming the web due to its dynamic capabilities.

Dynamic means that the content is open to changes, whereas static content is not susceptible to any change. Here are some dynamic capabilities of JavaScript:

JavaScript is at the base of many Front-end frameworks which offer a responsive webpage at the client-side.

Nowadays, there are millions of libraries used by developers around the world. Also, there is a separate JavaScript engine that can speed up the computations, and offer a quick page loading time. It is a text-based language that is useful on both client and server-side, to develop interactive web pages and end the need for static pages. JavaScript is known for web pages but, there are many non-browser frameworks that utilize it, for example, Node.js, Apache CouchDB, and so on.

Basically, HyperText Markup Language (HTML), along with JavaScript and CSS, is a foundational Front-end web technology. In HTML main focus is to emphasize formatting documents for display on a webpage.

HTML5 Boilerplate is one of the most popular front-end templates because, it helps you build fast, robust, and adaptable web apps or sites. In addition, the HTML5 Boilerplate assists in creating a website with attractive features and good components of HTML 5. Also, it has direct access to Google Analytics snippets and placeholder touch on the device. Additionally, it also helps include native elements such as video and audio. The apache settings also help a  developer deliver a high site performance.

The latest version of the boilerplate is 8.0.0.

Angular is a TypeScript based web app framework that is an integral part of the MEAN stack technology. It uses MVVM design which separates the business logic layer from the graphical user interface layer. Angular is a flexible framework so, the developers are able to create progressive web apps or technologies like Ionic, Cordova, etc. Further, Angular also helps developers to build UI views rapidly.

Also Read:  What are the features of AngularJS ?

React is a front-end JavaScript library useful for building a user interface and its components. It uses the classic MVC architecture, in which there is a separate layer of presentation and data availability. In React, Virtual DOM handles the access and manipulation of documents. Additionally, this DOM functions better with HTML and XML documents and makes them perform like a tree structure, and every HTML element works as an object.

React uses JSX style of coding, with a combo of different HTML quotes and tag syntax for creating the components. It also divides the large components into smaller ones for easy management. Thus, the overall productivity of developers increases with this feature.

Flutter is an open-source UI framework that helps build flexible and native-like, cross-platform apps with the help of a singular codebase. As a matter of fact, it is one of the fastest developing front-end frameworks.

Vue.js is a progressive, MVVM JavaScript framework that makes the best use of incremental adoption. Being one of the best JavaScript libraries, Vue.js is also creating interactive UI elements that are easy to adapt and lightweight in nature. Vue also provides data-reactive elements with a flexible and simplistic API. All in all, it’s easy to complete smaller projects with Vue.js.

Vue.js is compact in nature and hence easy to install and download. Using Vue.js small and large level templates can be developed, also errors are easily found which saves time and effort. Further, Vue facilitates the binding of current applications and provides detailed documentation.

Bootstrap is a free, CSS framework with design templates for typography, forms, buttons, navigation, and similar interface modules. A developer can think of bootstrap as a toolkit for creating the front-end elements of responsive sites easily and quickly without a doubt.

The pre-built components in bootstrap have a variety of themes and icons that help in creative development. Further, its design refers to mobile devices and web development.

The main objective of Bootstrap is to add the size, color, font, and layout of your choice to the project. In addition, it also makes sure that, the development process remains seamless and also, building a small prototype.

Bootstrap is easy because, developers only need to have the basic knowledge of HTML, CSS, and JS.

Ionic is a popular Front-end technology that is suitable for hybrid app development. Ionic has a single JavaScript codebase, so the developers are able to develop performant native apps or web apps.

Front technologies such as React, Vue, and plugins like Cordova and Capacitor play a major role in Ionic’s expertness. They host important features such as GPS, camera, flashlights, and many others.

Further, ionic also offers attractive cross-platform web, mobile, and desktop apps under a shared code base with open web protocols. In fact, app development can even be packaged with Cordova or Capacitor bringing user interface creation closer to native tooling.

Npm stands for Node Package Manager. Npm is a default package manager. In addition, Node.js is a JavaScript runtime environment that also allows developers to use JavaScript for backend development.

Further, Npm is also known to be one of the largest software registries in the world, also developers are able to share their code and reuse the code of other developers. Given these points, it’s fair to say that Npm is a powerful front-end technology.

So, as the package manager of the Node.js platform, Npm puts different modules in their respective place for nodes in order to find and manage dependency issues, with ease. Additionally, Npm is highly configurable and also supports a wide range of conditions. In short, Npm is ideal for discovering, installing, publishing, and developing Node programs.

Meteor is a full-stack JavaScript framework that is developed using a collection of libraries and packages so, that’s the reason it is considered an ideal front-end development tool. Further, developing a prototype of an application becomes much easier and developers can build effective applications at a fast pace. Meteor also offers solid integration with both MongoDB and Minimongo.

Meteor is a good choice for new developers given that they have some knowledge about JavaScript. As a matter of fact, Meteor is one of the simplest technologies for front-end developers. As an open-source framework, it is an ideal tool for creating a full-stack JavaScript application for the web, mobile, and desktop. With meteor, a developer can integrate technologies while using them right from the box, and also use the same code for different devices and operating systems.

Elm is a domain-specific delightful programming language apt for trustworthy web apps. Elm helps in designing web-browser based GUI that is entirely functional and created with a specific focus on performance, utilization, and robustness. Further, Elm makes use of type inference for corner cases detection and offers valuable suggestions. Here, the code decoupling helps developers rewrite the code and make the changes easily.

Since the variables in Elm are immutable they enhance the website performance. There is a highly reactive design that is providing programmers with a seamless and integrated experience. Because everything is available in a single location, Elm is popular as an effective programming language as well as an effective ecosystem.

Typescript is one of the most popular front-end technologies. It is powered by Microsoft. It is also a superset of JavaScript and keeps appending optional static typing components. Being an open-source language, Typescript shares its semantics with JavaScript.

Further, developers using TypeScript face lesser errors, find it easy to maintain and refactor code without delay. It works well on both client and server-side static typing. In general, Typescript is useful for huge projects whereas JavaScript is good for smaller projects. TypeScript Checker or bable compiler provides many options for trans compilation.

Grunt is also known as JavaScript task runner on the top of Node.js. It is a tool that is useful in executing tasks such as compilation, minification, unit testing, etc. But, there are certain tasks that take a long time due to the scripts and plug-ins. This technology solidifies the developer workflows and also improves the overall performance of projects. Further, there is a command-line interface that is used for executing custom tasks.

Grunt is distributed via Npm. Since the entire ecosystem is expanding day by day, there are multiple plug-ins that you can choose from, and Grunt will help you automate any one of them with minimal effort.

Backbone.js is also a JavaScript library that provides a proper structure for a web application by offering models with customized events and major key-value binding. Further, there are collections of enriched APIs with functions, declarative event handling, and views. It also connects well to the current API through a RESTful JSON user interface. Backbone.js is lightweight because, it depends on one JS library, Underscore.js, and JQuery.

Backbone.js is ideal for creating a single-page web application. Also, the components are in sync while using the library. Developers use settled perspectives with the help of the backbone layout manager because it reduces the complications for areas with lots of code. In addition, Backbone offers a simple way for overcoming the issues encountered. There is a specific and well-organized method of writing the code.

Sencha Ext JS is a sophisticated JavaScript framework that is useful in the creation of cross-platform and data-driven web and mobile apps for multiple devices. Sencha also consists of hundreds of pre-integrated features that can help create an effective UI component.

Further, using Sencha, developers can handle millions of records and offer inbuilt functionality with powerful analytics. Data is exported with a standard grid to different formats. Also, there is a flexible layout system that can provide thorough sizing and alignment. In addition, Sencha has visually appealing charts that are available in static and dynamic ways including different charts such as bar charts, pie charts, and line charts.

On An Ending Note

If you are willing to get a free quote for your project contact us!

What are the main types of programming language?

There are 3 main types of programming language: