Non-Disclosure Agreement for App Development: A Detailed Guide For Entrepreneurs in 2022 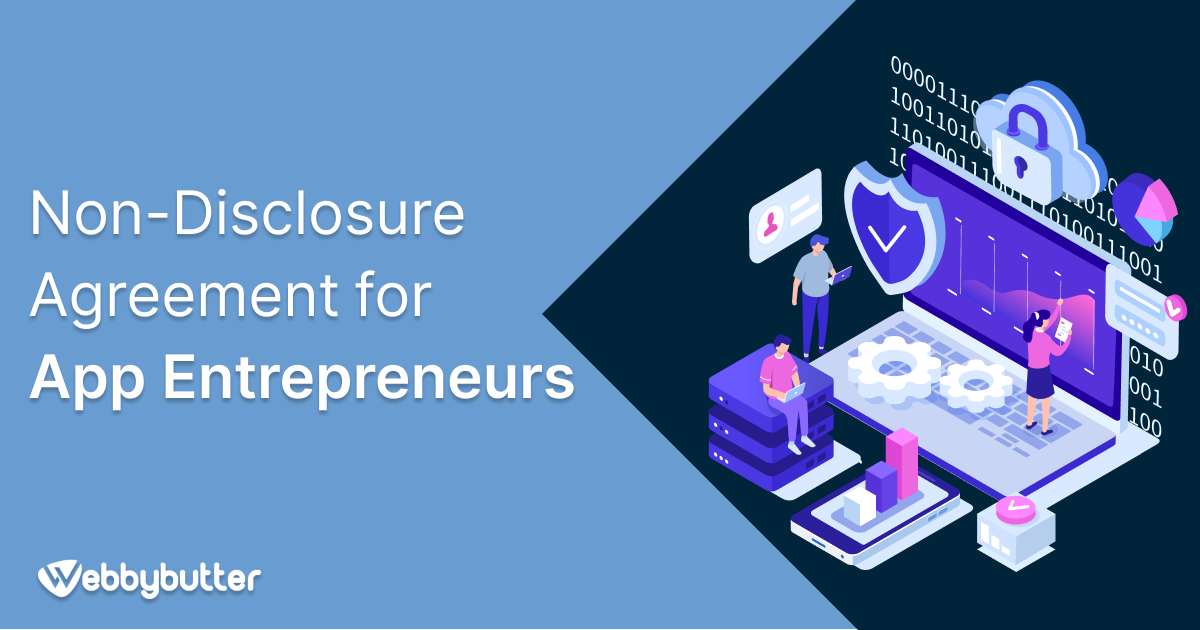 An NDA i.e. a Non-disclosure agreement for an application sounds like something you might not need right? Well if that’s the case you need to buckle up and rethink.

The reason we say rethink is that you may have signed one before but are not aware of the specifics of such contracts. NDA is amongst the first things that a developer thinks about while working on any app development process.

So, if you are wondering what is a NDA agreement? Then, this blog is for you.

What is an NDA?

NDA is a legal contractual agreement that prevents stealing your app idea and project information from anyone you work with. These NDA agreements are rock solid. No matter what the complications, the data is not disclosed to a third party.

There are many other terms in association with a basic NDA agreement:

There are three types of NDA – Unilateral, Multilateral, and Mutual. One must know each of them while involving third parties to work on your app.

NDAs will most often remain unilateral. Meaning, a single party agrees to keep sensitive information and trade secrets to themselves.

In general, a Unilateral NDA agreement is seen between an employer and an employee.

This type of NDA is generally used when there are three or more parties involved in a project. Multilateral NDA is useful because it removes the need for a separate bilateral NDA.

Mutual NDA allows two parties to share confidential information with each other.

Generally, this type of contract is used when two businesses work together and have an agreement to share trading secrets with each other.

Why your app idea needs protection?

When you decide to hire a custom mobile app development company for working on your mobile app idea, it’s obvious that you will divulge some sensitive information.

Moreover, if the app idea you have is related to the key process of the business such as manufacturing, research, or workflow, then they need to take precautions about the sensitive data.

Hence, in order to protect the important information or prevent the app idea from being stolen, you need to demand the mobile app development company to sign a standard NDA agreement.

In worst-case scenario, not signing a Non-disclosure agreement could mean that the company developing the application can claim the idea to be theirs.

Characteristics of a standard NDA

Here are some of the characteristics of standard NDA:

When do you need an NDA Agreement? – Million-dollar Question

People are confused while deciding when to go for an NDA . This happens because they are not aware of the situations that demand NDA agreements.

Here are some situations for when and why to ask for NDA:

You should demand NDA with those you work with even if you are in the initial phase of the project development. Because you are discussing your idea and presenting the road map of how you plan to do things.

The app idea doesn’t fall under any copyright protection. But, with NDA you can protect both methodology and good app ideas.

CEO of Facebook (Meta) is known to have stolen the sole idea of Facebook from his Harvard friends – Cameron Winklevoss and Tyler Winklevoss, who are brothers. Divya Narendra filed a lawsuit for copyright infringement against Mark.

The settlement for the lawsuit was $65 million. But, still, the ownership stays with Zuckerberg because his friends trusted him with their idea for the app and didn’t bother keeping an NDA.

This situation is in sync with the first Situation i.e. protecting idea and methodology.

The trade secrets go way beyond an app idea. The reason is simple, a company’s profits depend on trade secrets. Further, trade secrets consist of trading algorithms that separate your organization from other companies.

To clarify the concept, a trading algorithm is similar to a secret ingredient of a recipe.

Nowadays, every business wants its website to rank higher on search engines like Google. While Google shares some tips for SEO, mostly they keep their algorithms to themselves.

Now imagine what would happen if that algorithm is shared. The competitors will hop on and exploit such a situation.

In general, Freelancers, vendors, and independent contractors have many clients. When you collaborate with them, there is a chance for misconduct. This is because of their multiple clients.

Once the work is done there is a possibility that sensitive information is shared. So, signing an NDA while collaborating with vendors, freelancers, and independent contractors reminds them that those are your trade secrets and, they need to be kept under the lock or else face the legal consequences.

On many occasions, you partner up with another business for work. Having an NDA in such situations will help both partners.

A non-disclosure agreement between partners makes ensures that both parties are keeping the confidential information to themselves.

Hence, having an NDA between partnerships gives a sense of relief to both partners.

✤ Timeframe of an NDA

A Timeframe of an NDA is a period where an NDA agreement is valid. This timeframe bounds the companies to hold the secret information while the NDA timeframe is active.

Thus, from the time it becomes effective till the time it expires this legal contract stays active. However, it’s not a good idea to create NDA that prevents businesses from holding information infinitely. This means that the restrictions in an NDA should be reasonable.

This clause in an NDA highlights the information that is to be kept confidential or secret. In general, such secret information is attached to notices sent by email.

NDA contract must clarify the responsibilities and obligations of the parties. For example, the app development company needs to utilize a specific mode for communication or use a particular technology to build a mobile app.

✤ Consequences of Breaching an NDA

This is the most important clause in an NDA. If you have lawyers draw up the contract there is going to be a breach clause. This clause becomes active when a recipient party breaches the confidentiality agreement.

So what happens when you break an NDA? Generally, there are heavy financial penalties on contract breaches. However, getting an indemnity for all losses due to a breach is usually sufficient.

The majority of NDA contracts include the clause where only financial compensation alone cannot compensate losses arising due to the breach. Parties are agreeing to this in the contract itself.

Hence, the concerned party can reach out to the court for seeking an injunction.

✤ Return of The information

Once the NDA agreement ends, the confidential information is sent back or destroyed by the recipient.

Till now we saw the situations and clauses for NDA agreements now let’s explore some scenarios where NDAs might not be necessary.

Not everyone is a fan of NDA. They are complex; contain tons of legal jargon and demand hiring a lawyer at times to draft out the contract.

Drafting NDAs surely has its benefits in app development projects, but they are not always necessary.

Here are a few scenarios where you can avoid using an NDA.

If you are in the beginning phase of hiring a freelancer, contractor, or app development company, you don’t need to straightaway emphasize NDA.

Bear in mind, we are talking about the initial phase of hiring where you won’t be getting into specifics with interviewees. In fact, this is the time when you can avoid sharing any trade secrets and discuss your ideas for apps.

Scenario #2 All you have is an App Idea

To protect your app idea you need an NDA, but if you don’t have anything substantial then you don’t need an NDA.

In fact, if you don’t have a concrete and unique idea a lot of freelancers and contractors won’t sign an NDA. This happens a lot because there are lots of clients with similar mobile app ideas and signing an NDA will prevent them from working for those clients.

In this scenario, let’s say you are working on a small-scale project. All you need is a contractor or freelancer to execute a small task. This is fine until you insist on having an NDA because chances are they will back out. The reason is simple; they think that the liability of an NDA is not worth the money they will make.

Hence, if you have a major project and lots of tasks for someone, then this will provide you the leverage over negotiation.

Scenario #4 Contractor refuses to have NDA

In general, freelancers and contractors will refuse to sign NDAs. The main reason is that hardly any app ideas are truly original these days.

However, if you are in a scenario where the company is trustworthy and professional, there is a chance you can forgo an NDA. This is because many companies rely on their reputation.

In this scenario you think you have a unique mobile app idea but, there is a possibility that it’s the same as someone else’s.

Even if your app idea has some tweaks and additions, it might not have enough confidential information to warrant protection under an NDA.

If you are working with someone who is already investing in your project you don’t require an NDA.

So, while working with investors, a high-level review of your mobile app is good enough. There is no requirement to get into trading secrets and confidential details. Further, investors actually hate signing NDAs. It legally binds them from having strategic discussions with other possible investors.

App development is exciting! You see your ideas flourish as an app bringing change into the modern world.

Non-disclosure agreements are not so exciting part of app development. But, they are important from a legal perspective. It’s this boring legal procedure that will protect app ideas using legal clauses.

If you want specific details of how does an NDA look? Contact our legal expert for consultation.

What are the Key Elements of a Non-disclosure Element?

5 key elements of a Non-disclosure Element:

How create an NDA?

Microsoft word will get the job done while you write an NDA. But, still, you should convert the word file into PDF or print and send the hard copy to the concerned party. This reduces the chances for manipulation in the contract.

Nowadays, the NDA agreement template is more useful in making such legal contracts.

Where can I get a free NDA template?

You can get free NDA templates from different websites. Like signwell.com and Sba.com