Serverless vs Microservices: What are they? And what is the Difference? 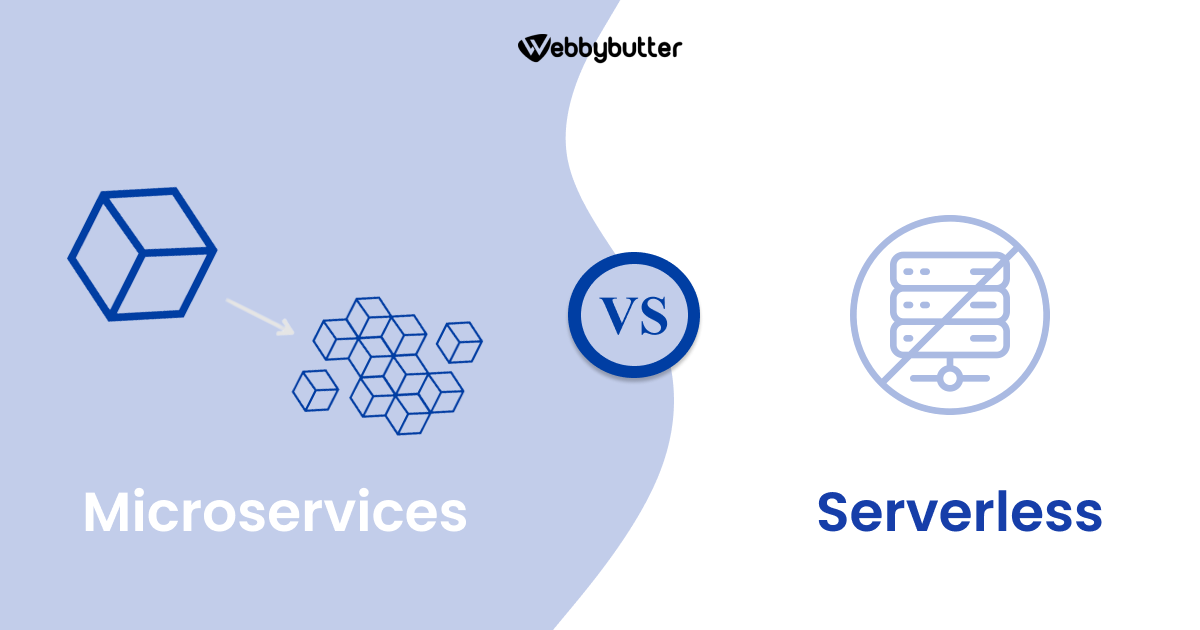 However, there are respective perks of using a particular service. In this blog, we will explain both the concepts and also lay out a constructive comparison: Serverless vs Microservices so that you can pick the best suitable technology for app development.

Serverless vs Microservices: What are they?

Serverless is where a third-party cloud provider takes care of the server. To clarify, an organization does not have to worry about investing or maintaining physical hardware. Rather, they depend on a third party for maintenance of physical infrastructure; this includes servers, networks, storage, etc.

The serverless approach allows your organization or business to build applications without having to manage the underlying infrastructure.

✤ Function as a Service (Faas)

Generally in Function as a service, developers run code modules i.e. functions of an application without worrying about the backend infrastructure or system requirements.

✤ Back-end as a Service (Baas)

In general, Baas is offered as a service where the entire backend of the system that is- database, storage, etc. of a system is managed independently. This usually involves outsourcing backend services to a third party for maintenance and management purposes. Hence this helps the enterprise in focusing on the development of core functionalities in the application.

Further, each microservice is deployed within a container that works as a stand-alone application.

In addition, every microservice contains basic elements that support its independent run-time such as – its own database, libraries, and Templates.

Generally, a DevOps team breaks down every feature and function of a software application into separate services in such a manner that the app’s entire functionality is maintained while converting it into a decentralized model.

Further, the DevOps team defines the dependencies between these components and then assigns a component to a team of developers for development and maintenance.

Each of the microservices is individually developed and tested before getting deployed in an isolated container.

In short, this approach helps in developing a framework where even if one microservice breaks or is under maintenance, it is easily fixed and redeployment will also not affect other services or the overall framework.

Here are some main differences between Serverless vs Microservices

✦ When to use Serverless

Generally, Serverless is useful in web and mobile app development. This is mainly because they are low-cost and work efficiently with lightweight apps. On the other hand, Enterprises have to make sure they are vigilant while using Serverless as it has limitations in Use-cases.

✦ When to use Microservices

You can use Microservices for applications and systems that will continuously evolve over time, is complex, or demands high scalability. In fact, Microservices are ideal when you have to process large data. They do this by breaking down complex functions into multiple services. This ultimately helps in easy development and maintenance.

Check this out, How to make an app like Uber?

Serverless vs Microservices: Pros and Cons

Like any other technology, both Serverless and Microservices have their pros and cons. Let’s take a look at them.

You can focus on the application instead of server maintenance.

Server scaling is easily done i.e. server goes up or down by itself.

Pay for the capacity of the server that you are using, this means no need for paying for inactive/idle time.

Using a serverless model you can quickly develop new features and test your ideas instantly.

In Serverless Model it is very tough to visualize how code will function after deployment. This usually happens because you cannot replicate the serverless environment.

In serverless architecture, after every function is complete, it stays in cache but not for long. This means that when you restart the function it is not cached. Hence, it will have to answer the invoke request again which takes time.

The majority of people find it difficult to commit to one serverless environment provider for a longer period of time.

In general, microservices are not dependent on each other as much. And as mentioned earlier failure in one of the services will not affect other services. This makes the application/software resilient. This resilience comes in handy while massive traffic spikes.

While using microservices you can add or remove functions. In fact, you can scale different components with minimal effort as the services are independent. In addition, you don’t have to depend on the entire code base like in monolithic apps.

You can easily connect microservices to an API even if it’s written in different languages. This is a useful benefit of microservices because different technologies respond to different requirements of a feature. However, if you use too many languages, you may find it difficult to connect your logistics.

Just like using different languages, you can connect microservices hosted on different platforms. You can also host a section of an app that is serverless.

At times the assumptions are not quite accurate even though we have lots of data. In such cases, microservices let you test everything. In fact, there is no need to pay for adding new features that you might remove later. This shows how microservices are flexible for apps.

Many small teams can operate on a particular project at once.

While dealing with microservices you have to precisely plan how to connect all of them and transfer data from one location to the other.

The independent nature of microservices makes testing difficult. The reason is simple, one has to test every single microservice individually and then test connectivity on a global scale.

In microservices, you have to go through each log while debugging.

You have to regularly assess your APIs because many times the configuration is not precise and that makes it vulnerable.

Serverless vs Microservices: which one is right for your business?

We saw the advantages and disadvantages of both Microservices and serverless. Determining which one suits your business depends on your goals and product scope.

However, if we have to pick specific services then Serverless is suitable for startups or mid-sized companies and Microservices will suit enterprise-level organizations.

If you are looking for specific details or planning to use any model but are confused, Webbybutter will help you with it.