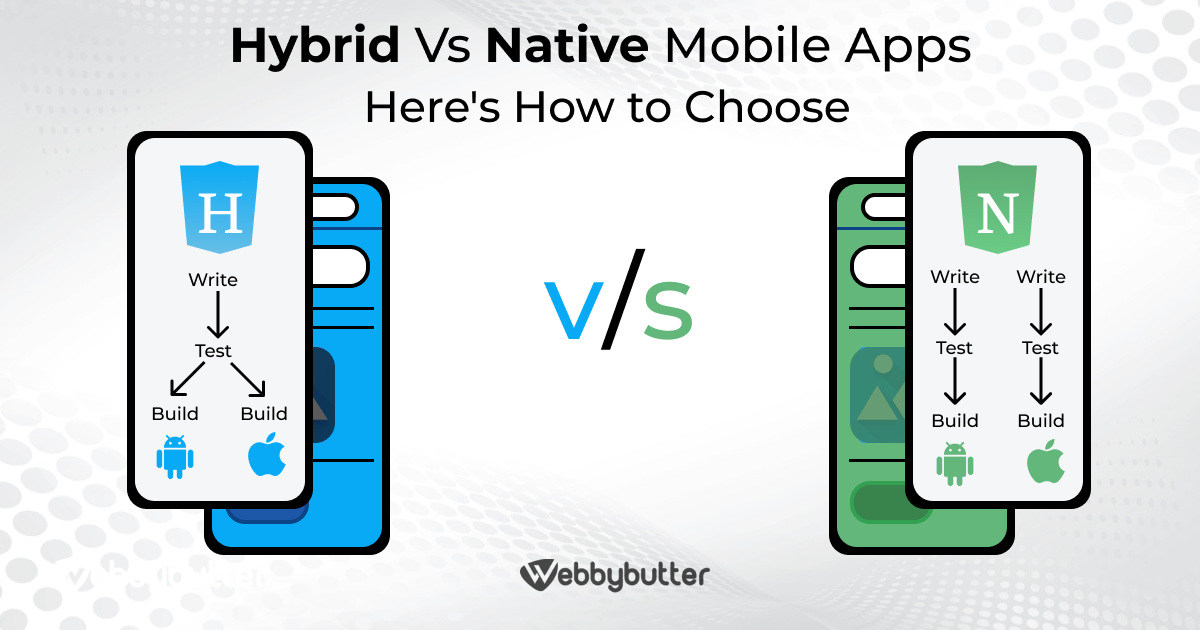 Mobile Application development has become a trend in the 21st century. From a common user to a high scale company everyone desires to have an application suitable to their requirements. Requirements may be business-related or personal. In any given scenario Native or Hybrid apps are the way to go with the flow in the current digital era. So a tough war of Native vs Hybrid apps will always become the first question while developing a mobile app.

The Native and Hybrid discussion has also turned into a heated argument of Native vs Hybrid amongst the developer’s community. Few prefer Native and few prefer Hybrid. There is always a bias and the question will always be there: Which is better hybrid or native app development?

So before you dive into Native vs Hybrid App Development Comparison ask yourself,

Am I new to the mobile application ecosystem? Am I having difficulty choosing between Native and Hybrid? Do I have a clear understanding of the different native vs hybrid mobile apps? If your answer is yes, then you will get all your questions answered. We’ve got your back.

By the end of this article, you will get an unbiased point of view regarding Native vs Hybrid Apps.

What is a Native App?

Native apps deal with specific mobile operating systems like Android or iOS. Platform-specific code is used for building a Native app. So the code compatibility is with a single platform. Native apps have seamless connectivity with the hardware like camera, GPS, Address book, etc.

So, if you want to run the application on two different platforms you will require separate codes written for both of them, from the scratch.

The upside to this is you get the inbuilt features of the device.

The development of Native apps requires different frameworks. The technology stack in Android and iOS goes like this:

The language is used for both mobile and desktop-based applications. Java provides developers with access to various libraries for executing different android features.

Google supports Kotlin language for Android development. It is provided as an alternative to the java compiler in Android Studio. Kotlin speeds up programming in app development.

Objective-C is a programming language that has phenomenal development experience and has tons of libraries at the developer’s disposal. Further, this technology stack is also compatible with other programming technologies.

What is a Hybrid app?

An app that is compatible with all the operating systems is known as a Hybrid app. This means that there is no need for two separate codes.

Hybrid apps are actually an extension of regular web apps. They are basically wrapped in the native app’s shell.

A hybrid app is developed using HTML5, JavaScript, and CSS. So it feels like a regular website. They are quick to build and easy to launch.

Xamarin is an open-source framework is strongly supported by Microsoft. It is suitable for simple and easily maintainable apps. It is a preferred choice for business-oriented projects.

Ionic framework is easy to learn and it is based on technologies like JavaScript, CSS, and HTML. The UI is simple but the challenging part is maintenance.

Now you have brief details about Native and hybrid. Let’s use them to break down the comparison between Native and Hybrid apps along with different parameters: User Experience, Budget, Market, Complexity, Experience, and Expansion.

So if you prefer UX as your main priority then you know you need to go with a Native app. Most native apps cover inbuilt features like a Camera and GPS as mentioned earlier. Lots of native apps provide seamless UX. The users being aware of the working of the native platform is a bonus for UX from the developer’s perspective.

This doesn’t imply that UX in Hybrid is not good. Technical expertise is required for achieving a great UX in a Hybrid app Ex: Instagram.

If you are looking for developing a minimum viable product (MVP) then hybrid should be your preference. Once you get the feedback you can switch back to the native approach.

What is my Budget?  You need to address this query before considering any approach.

Alright! Let’s see which app you can have in your budget Native or Hybrid.

If you use the native approach you will need two different developers for respective platforms. Your budget just explodes!

In hybrid, there is no need for using different resources. The single source code will get the job done for all the platforms. Your budget just gets within your range here.

So you need to specifically choose hybrid if you have budget limitations.

This is a tricky parameter, if you have patience for waiting and willing to launch your product late say 5-6 months you can go with a native app.

The hybrid app can be launched across all the platforms within 5-6 weeks of duration. The deployment time here is less compared to Native.

Again, application complexity comes into play here so choose accordingly. It’s up to you to decide if your goals are matching with the timeline for deployment. Our Native and Hybrid app developers can help you choose the best type of app development based on your requirements.

Complexity is an important parameter to consider. If your app is having minimal functionalities like fetching the data and displaying it then hybrid is the approach suitable. If that’s not the case, choosing a native app development approach is preferred.

This parameter is related to the company. A company can be in two situations either it’s new in the competition or established.

In both cases, the approach differs Native approach is used by established companies and if you are relatively new then hybrid is the way going forward.

If you have a new startup go with the Hybrid app. Low budget constraints can be handled easily during this phase. If your ambitions are to expand in the future as a company then you will need to switch to Native.

There are so many other parameters and factors separating Native and hybrid from each other.

Don’t worry we have it simplified, have a look at the table for a better perspective on native app vs hybrid app comparison. Single source code makes it faster than the hybrid. This happens due to the preloading of the code in advance before displaying the elements.

This is a concrete feature of a native app. Here the application will operate smoothly in absence of internet connectivity. Users can access major features during airplane mode as well.

This functionality comes in handy for remote locations.

Native apps are built on a specific OS, so here it is made sure that the UX perfectly aligns with the specified features of OS. The guidelines are followed with precision in the Native app so a user can easily adjust to the features because of familiarity.

Here the debugging process is simple compared to hybrid as we have only a single code to refer to.

Optimization is done keeping in mind the single operating system, this guarantees high performance. These apps are compiled with core programming languages

The technologies involved in developing Native apps make sure that data remains protected on the user’s end.

There is no code reusability in Native apps. Here a developer needs to make efforts for coding in both the OS (Android and iOS ). This is time–consuming.

The cost of maintenance in Native apps exceeds the cost of actual development.

Native apps are language-specific. So it becomes necessary to hire with a high skillset which itself is a challenging task. Above that, you need to hire two different teams.

There is a single code base for all multiple platforms. So no requirement for separate files for different platforms or separate developing teams.

No separate teams are required so cost is reduced. Tight budget projects can be easily developed.

The code reusability helps in the easy maintenance of the app.

Hybrid apps are easy to use due to their lightweight nature. The compatibility across multiple and smooth functioning hints towards the lightweight feature.

There is no offline support available here like in Native. Users have to connect to the internet for accessing the features. Best example: Online games.

The single source code for deployment causes some inconsistencies in performance amongst platforms. Android and iOS have some specific functionality, due to which some features may fully function in one platform but not in the other.

The UI in hybrid apps is less attractive and this can drive a user away from your application.

As we have seen the advantages and disadvantages of native and hybrid app development, let’s check out some top applications developed on Native and Hybrid platforms respectively.

The best app to understand the Native approach. The mail service is accessed by millions of users. It allows offline access to the inbox and other features to some extent so you don’t miss out on important emails.

The most commonly used messaging service is developed as a Native app. It is developed for both Android and iOS.

Spotify is a digital music service platform with access to millions of songs and podcasts. It is a well-praised Native app and thanks to Google cloud it has unleashed remarkable performance efficiency for better UX.

It will be harsh on both Native and Hybrid if we actually choose one approach. Because Hybrid sometimes uses a native approach in the development phase and Native has its own benefits.

So depending on your app requirement, you can filter out the points and try to choose what’s best for you.

If the applications of Native and Hybrid didn’t match the idea of the mobile app you had in mind, we have a fantastic team of developers to sort that out.

Discuss your queries with our expert and receive a solid consultation for your next mobile app.

We are excited to help you!☺